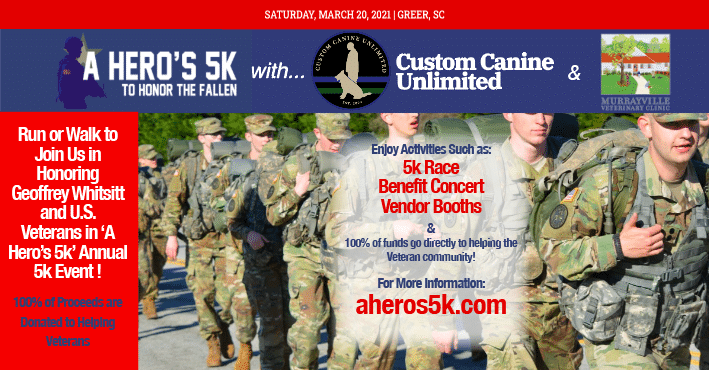 “Do you regret that he joined the Army… do you wish he didn’t enlist?” I asked Debby Whitsitt. Debby told me, very quickly, that no, she had no regrets that Geoffrey Whitsitt joined the Army. She told me that, “Being an ‘Army Guy’ was his dream, and I taught my boys to live their dream. Whatever it is, you live it, and you be the best.”

Geoffrey Whitsitt wanted to be an ‘Army Guy’ from the time he was four years old. Debby tells me that he always called it that, ‘Army Guy’. Geoffrey has an older brother named Steven who he very much looked up to. Steven was 6 years older than Geoffrey, but their age difference never took a toll on their relationship. As children, they would spend hours outside playing together. Growing up, they were homeschooled together until they reached high school and always participated in church activities. Their love for each other was always palpable, although their paths in life would take them physically apart from one another.

There’s a lot that people didn’t know about Geoffrey. Geoffrey loved sports and music, always involved in those activities. Georffrey also had the voice of an angel, although his comrades would never know. When he was younger, he even auditioned to be a part of the much-esteemed Furman University Children’s Choir and was chosen. Geoffrey loved being a part of the choir, it even gave him the opportunity to travel with the troupe to perform. Geoffrey had raw talent and he was able to perform with the cast of ‘Godspell’, who had travelled from New York to Greenville, South Carolina. As Geoffrey got older, he eventually attended the Greenville Tech Charter School in South Carolina when he reached the tenth grade. Geoffrey was fearless – fearless to perform, fearless to be around his peers as his schooling transitioned, and fearless to follow his dreams.

This was the point where the brothers, Geoffrey and Steven, would start to lead more distant lives from one another. Steven had dreams of being a bible translator and eventually attended bible school in Wisconsin. While Steven followed his dreams, Geoffrey was busy fulfilling his own. Geoffrey joined the delayed entry program for the Army and he excelled completely in his course. When the time came for Geoffrey to finally be an ‘Army Guy’, Geoffrey was “so ready and he did very well.” Geoffrey would spend time at a number of military bases, such as Fort Benning in Georgia and Fort Bragg in South Carolina to name a few. Fort Bragg would be his last assignment in the United States, as the trained ‘Army Guy’ was then deployed to Afghanistan.

“…Another thing the Bible tells us is that God knows the number of our days. He knew you before you were conceived; he knows how many hairs are on your head; he knows that number of days you have. So, no matter where you are or what you’re doing, when a person’s time comes that they’re going to die, that’s it. I believe that. And so, Geoffrey lived his dream and he died living his dream…”

Geoffrey Whitsitt enlisted in the Army in February 2008, deployed to Afghanistan in 2009, and died January 13, 2010. When Geoffrey was deployed to the Middle East, it was during active battles, so he called and wrote home when he could. Geoffrey would usually call home around midnight Eastern Time, and his mother, Debby Whitsitt, always patiently waited for his call.

Debby and the brothers’ father were a source of unending support for their sons. Debby always taught her boys to pay attention to the sky. Debby ingrained in them that at times of doubt and worry, they could always look up to the sky. That sky would be the same sky over their family, and when they saw the sky, the boys knew that their mother was under the same sky and that she had infinite love for her sons. When Geoffrey would call home, Geoffrey would tell Debby that he just needed to “know you’re on the other end of the line.” Debby would ask Geoffrey to describe the sky.

One week before Geoffrey lost his life, he called Debby and expressed a fear for his life. He told her that he was driving a vehicle, with his Sargeant in the passenger seat earlier that day. An IED came through the window on the driver’s side where Geoffrey was sitting, passed by the Sargeant passenger, and exited through the passenger side window. Debby prayed with her son that day; they prayed for courage and strength. Although Geoffrey was nervous he could lose his life, Geoffrey certainly never lost his courage. Geoffrey told his mother, “I want you to know, I’m willing to die for my country. I am willing to die for you and Dad to be free. If I am going to die, I want to die with my boots on.”

A week later, a car pulled up to with Whitsitt home. The car went out the half circle driveway and continued up the road, then came back. The boys’ Dad said to Debby, “I think something has happened to Steven,” who was in Bahrain on a mine sweeper.

When the car came back to the home, a soldier got out. Debby and the Dad were hoping that it was one of Geoffrey’s friends coming to visit. Debby had a sobering realization when another soldier stepped out of the car. As soon as Debby saw the second soldier, she knew what had happened. Something had happened to Geoffrey. Debby tells me she “lost it” once the second soldier stepped out, but she could remember the soldiers telling her “On the behalf of the President of the United States, we regret to inform you that your son, Geoffrey A. Whitsitt, was killed in action…”

Geoffrey A. Whitsitt was killed January 13th, 2010. His casket arrived home on January 21st, on Debby’s birthday. His funeral was one week later.

No one can imagine the pain of losing a child. Debby’s life was instantly turned upside down. Debby tells me she was always very goal oriented. For 9 months Debby lost sight of any goals and her friends noticed that Debby had lost her zeal for life. One friend in particular, Cheryl, had noticed this major change in Debby. Cheryl and Debby had children around the same age, and when the children were younger, they used to meet at Furman University quite often to walk with the kids. Cheryl asked Debby to meet her in Greer for lunch. Debby did not want to go to lunch, as she had “no desire to go out, see people, or interact.” Debbie fought through her pain, much like Geoffery, and went with Cheryl to lunch.

As the friends reunited, Cheryl expressed her worry and concern for Debby. Cheryl told Debby “I’ve not seen you make a goal for nine months, and I want you to make a goal today.” Cheryl, being the amazing and concerned friend that she is, handed Debby a pen and paper to write down a goal. Debby knew that she had changed; her goal-oriented ways hadn’t existed for nine months, since Geoffrey had passed. Debby suggested that her first goal be: “Every day I will get out of bed.” Anyone who has been through trials and tribulations in life knows how hard this goal can be. Debby showed fearlessness and courage, just as Geoffrey had.

Debby’s next goal was: “I will take one step every day,” and the next: “I will brush my teeth every day,” “I will brush my hair every day.” The goals started pouring out from there: “I will eat.” Debby eventually built up to the goal of: “I will walk one mile.” Debby paused to think about that one mile. She thought that instead of just building up to walk one mile, Debby thought that she could build up to walking three miles on Geoffrey’s birthday in memory of him. Cheryl told Debby that three miles averages out to a 5k, and so pitched the idea to make the one mile walk a 5k.

Cheryl asked Debby who she wanted to walk with her in memory of Geoffrey on their new plans for a 5k. Debby named ten friends she wanted to share her special walk with. Of course, the pair of friends thought Furman University would be the perfect place to host their annual event. Cheryl dreamed bigger than just ten friends; Cheryl thought “What if we invite all of Greenville?” All of Greenville was great, but it was most important to Debby that her ten chosen friends were there.

Cheryl asked Debby “What do you think we should call our 5k?” The pair of friends decided that it was a no brainer; Geoffrey was a hero, so it’s only fitting that the 5k evolved into “A Hero’s 5k”.

The last picture taken of Geoffrey was by Associated Press and features his silhouette. Debby and Cheryl used this image for flyers and friends help them put the flyers all over town to spread the word about the 5k. Debby even wears this silhouette on her vest. The town of Greenville, South Carolina embraced the event and the first annual ‘A Hero’s 5k’ had over 300 participants.

‘A Hero’s 5k’ turned into an annual event and fundraiser, where the all of the proceeds go directly to the betterment of Veterans. Although there is a team who coordinates details such as media, the website, directors, no one at ‘A Hero’s 5k’ gets paid – it’s all volunteer work.

Want more details? Stay tuned to our Blog posts to see more background of this wonderful event and to figure out how you can help out (or take a walk with us!) go to:

Note from the Author:

I had the absolute pleasure of interviewing Ms. Debby Whitsitt for this article and I could not feel more blessed to have met and interacted with her. Ms. Debby’s story fills me with compassion and hope, just as she has for everyone she meets. Her overwhelming love for her sons is completely evident and you can tell that she’s just one of the best Moms in the world. We spent a long time talking about Geoffrey, and I feel like I know him just by the way she speaks about him. Ms. Debby is truly one of the most inspirational people I’ve ever met – Thank you Ms. Debby!

On behalf of Custom Canine Unlimited, we appreciate the opportunity to be able work with ‘A Hero’s 5k’ and we are blessed to be in a position to be able to give back to such a wonderful community of people.