‘Cornhole for K9s’ with the Wildwood K9 Unit 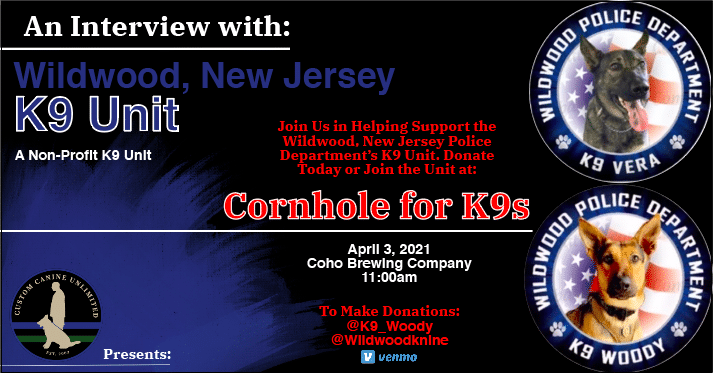 Custom Canine Unlimited had the great pleasure of meeting New Jersey’s Wildwood Police Department’s K9 Unit , Joe and Chris. Joe and Chris took some time out of their busy day to give us some more information about their unique department and positions.

“It was officially a dream come true…”

The Department of Wildwood reopened their K9 Unit in 2017, where Officer Chris was interested right from the start. The Department asked its employees to submit an application to become a K9 Handler within the department, and Chris tells us he practically jumped at the opportunity. The Department did not start utilizing K9s until Chris had years of experience functioning as a member of the Police Department. When Chris was their first pick for the new Unit, he tells us that it was, “officially a dream come true.”

“In first grade, I took my Dad’s handcuffs to school and handcuffed myself to a friend and lost the key…”

Joe also had early aspirations of being in Law Enforcement. He tells us that when he was in first grade, he took a pair of his Dad’s handcuffs to school. Of course, as a first grader, he handcuffed himself to a friend, then quickly lost the key. Joe tells us that the, “State Police had to come,” to get the handcuffs off. All the while, the administrator at the school told him he was, “going to get arrested,” for what he had done. When the State Police Officer got to the school to unlock the handcuffs, Joe tells us that the Police Officer was very “cool” about the whole ordeal and, luckily, did not take the first grader to jail. That incident had a lasting impression on Joe, helping forge his aspirations to become just what he is now, a K9 Handler.

Chris and Joe don’t just know each other from the Wildwood K9 Unit, the Officers told us that the pair actually grew up three miles apart from one another. Chris and Joe reminisced on playing football together as kids, and even now they live a mile apart from one another. CCU doesn’t think that there could be a better pair as coworkers and partners.

Joe and Chris even took their responsibilities a step further than other K9 Handlers – they turned their K9 Unit into a non-profit organization to help protect it. Chris and Joe are tasked with raising funds for their Unit, as well as all the other responsibilities of the organization, such as accounting and paying bills. Their jobs are not only to protect the citizens of their town, but also to make sure their Unit is funded and functional. They made it especially clear that it is very important to them that people see exactly where their donations are going. They tell us that, “The whole goal is to make sure that the money is there when we need something for the current dogs, or if something happens…” All of their funds go directly to helping their K9s and Unit.

Although we all know K9 Handlers protect us and keep us safe, it’s also very important for the Wildwood K9 Unit to be a part of their community and to give back. Of course, the K9s and K9 Handlers have been able to take numerous guns and drugs off the street, but they also use their time and energy investing in the children of their town. The K9 Unit donates to local sporting groups and even encourages kids to clean up their playing areas around time by hosting them for free lunches. The K9s and Officers realized they had a great opportunity for community outreach, and they’ve been doing just that.

“[Having] a non-profit gives us an opportunity to give back… having a K9 Unit is a huge ice breaker in the climate we’re in today.”

The Officers tell us that people who may not have had a great perception of the Police can have more opportunity to interact with the Police via the K9s. They tell us that the, “Kids love them and even parents are more likely to interact with them.” The pair says that “The dogs are absolutely a deterrent [for crime] … People tend to act less disorderly with the dogs are around.” This K9 Unit is doing so much in their own community and Custom Canine Unlimited wants to help support them in their non-profit endeavors. We learned of an event the Wildwood K9 Unit is holding, called ‘Cornhole for K9s’’!

‘Corn Hole’ for K9s is a local event at Coho Brewing Company on April 3rd, 2021 at 11:00am. Teams can register for $60 and help support this awesome Unit! This is their first annual cornhole tournament, but the Unit is hoping to make the event yearly to help their department. We asked, “Why cornhole?” and the Joe told us that there was a tournament on the beach that he had gotten involved in and he noticed the activity was, “blowing up.” Joe even tells us that it’s been, “like one giant cornhole family.” There will also be other activities as the event, such as a raffle and a silent auction.

We asked if the partners wanted to adopt their K9s out of retirement, and Joe & Chris didn’t hesitate – they absolutely plan to have their K9 partners forever.

K9 Woody and K9 Vera have, what some call, “fur-ever” homes with their Handlers. Both of the K9s are dual-purpose dogs; they are both trained in patrol and narcotics detection, making them excellent teammates for their Handler counterparts.

The K9 Unit also sells apparel that directly funds the Unit. To check out some shirts and other apparel that anyone can purchase, check them out on Facebook @wildwoodPDK9 and on Instagram at @K9_Woody . You can also find more information about ‘Cornhole for K9s’ and upcoming events, such as the ‘National Night Out’, where the duo will be doing demonstrations where Civilians can see just how capable these K9s and K9 Handlers are!

Joe and Chris also wanted to make sure that they thanked their Chief and the City of Wildwood, New Jersey for the amazing opportunity!

Want to donate to the Wildwood Police K9 Unit?

Donations in the form of monetary values are also accepted!

To easily donate on mobile via Venmo, use the handles:

Don’t forget to check out all the Wildwood K9 merch too to help support!