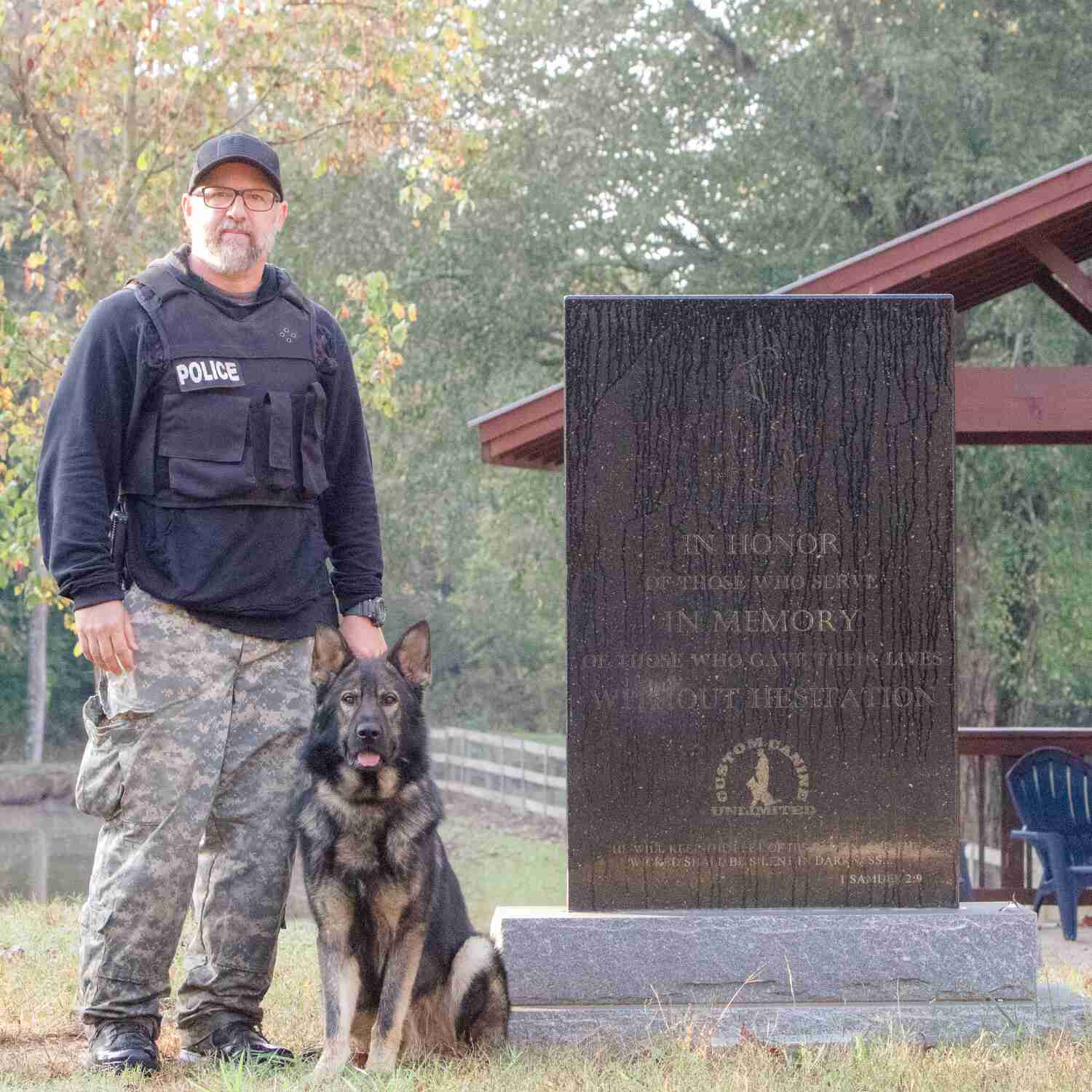 10:00am, Monday morning, December 21st. A city employee in Florence, South Carolina is beginning to open the community center for the day. It is her second week at the community center as she began a career there to help children; the employee notices an 18-year-old male approaching the locked community center door on a bicycle. The male gets the attention of the city employee and asks her to let him in to use the bathroom. The employee unlocks the doors for the male, but instead of using the bathroom, the male stabs the employee and mortally wounds her. The male flees on a bicycle.

11:45am, Monday, December 21st. Officer McKenzie arrives on scene with “Magnum,” both of which just completed training at Custom Canine Unlimited. McKenzie sees that there was heavy rain the night before and feels encouraged as he can see bicycle tracks for about twenty feet, but then the tracks disappear into a grassy area. Luckily, this is all K-9 “Magnum” needed to find the scent that the suspect left behind.

Despite the difficulty of the task at hand, Officer Shannon McKenzie and K9 “Magnum” start to track the suspect. “Magnum” is able to pick up on the scent of the suspect immediately and begins to lead McKenzie on the trail of the suspect. “Magnum” takes McKenzie across the road, on a turn, and then about 120 yards down another road. “Magnum” leads through an abandoned lot to a path that starts in the back end of a neighborhood. “Magnum” goes straight towards a house that has bicycles laying in the front yard.

Investigators begin to examine the bicycles in the front yard of the house to determine whether the tread of the tires matches the bicycle tracks near the community center. Officer McKenzie and K9 “Magnum” go through the neighborhood to see if there are any other scents “Magnum” can alert on, but “Magnum” keeps bringing McKenzie back to the house with the bicycles.

It is admitted to investigators that the suspect in question was recently kicked out of his mother’s house and went to stay with his cousin; the suspect asked for his mother to let him come back, but his mother declined. This is when the suspect tells his mother that he is so angry that he is “going to find someone to kill”. The suspect rides his bike to the community center, stabs the victim, and then flees. Unfortunately to the tightly knit community of Florence, South Carolina, the victim passes away early the next morning.

Although this is a tragedy for a community, the suspect was able to be brought to justice swiftly due to the Florence Police Department K9 Team of Officer McKenzie and K9 “Magnum”. The culmination of many things right came together this dreadful day. The trust the department had in this K9 team to call them out on such an important case, the ability of the K9 handler to rely on his training, and the opportunity of “Magnum’s” training to shine through. The invaluable asset of a K9 team was displayed today.

This K9 team completed four weeks of rigorous K9 handler training at the Custom Canine Unlimited’s elite Police K9 Training Facility located in Gainesville, Georgia. Through their hard work McKenzie and “Magmum” successfully completed the training course and certified as a Drug & Tracking team in November of 2020.  Officer McKenzie has had experience with working dogs, although his experience had been limited to drug dogs. Agent McKenzie tells us that he was thoroughly impressed with his experience at Custom Canine Unlimited. Not only was he taught invaluable skills on how to work with “Magnum”, but the staff at CCU was immediately available to him and by his side to help as soon as the case unfolded. McKenzie tells us, “I had not experienced that type of support from other places I have trained at, prior to CCU.”

Our thoughts and prayers are with the victim’s family as the suspect is being brought to justice and we couldn’t be any prouder of Officer McKenzie and K9 “Magnum”. As Custom Canine Unlimited evaluated “Magnum’s” skills prior to training, the staff at CCU knew that “Magnum” was going to be an invaluable part of the K9 team in Florence. Way to go “Magnum”!

For more information about the top tier training programs that K9 “Magnum” and Officer McKenzie participated in, visit https://customcanineunlimited.com/training-programs/

Featured In The News K9 Training Law Enforcement
Previous reading
Top Veteran Benefits of 2020
Next reading
Crime Fighting K9 “Roney”
Thanks for letting us know!
This is how we improve bertha
What did you expect to happen?