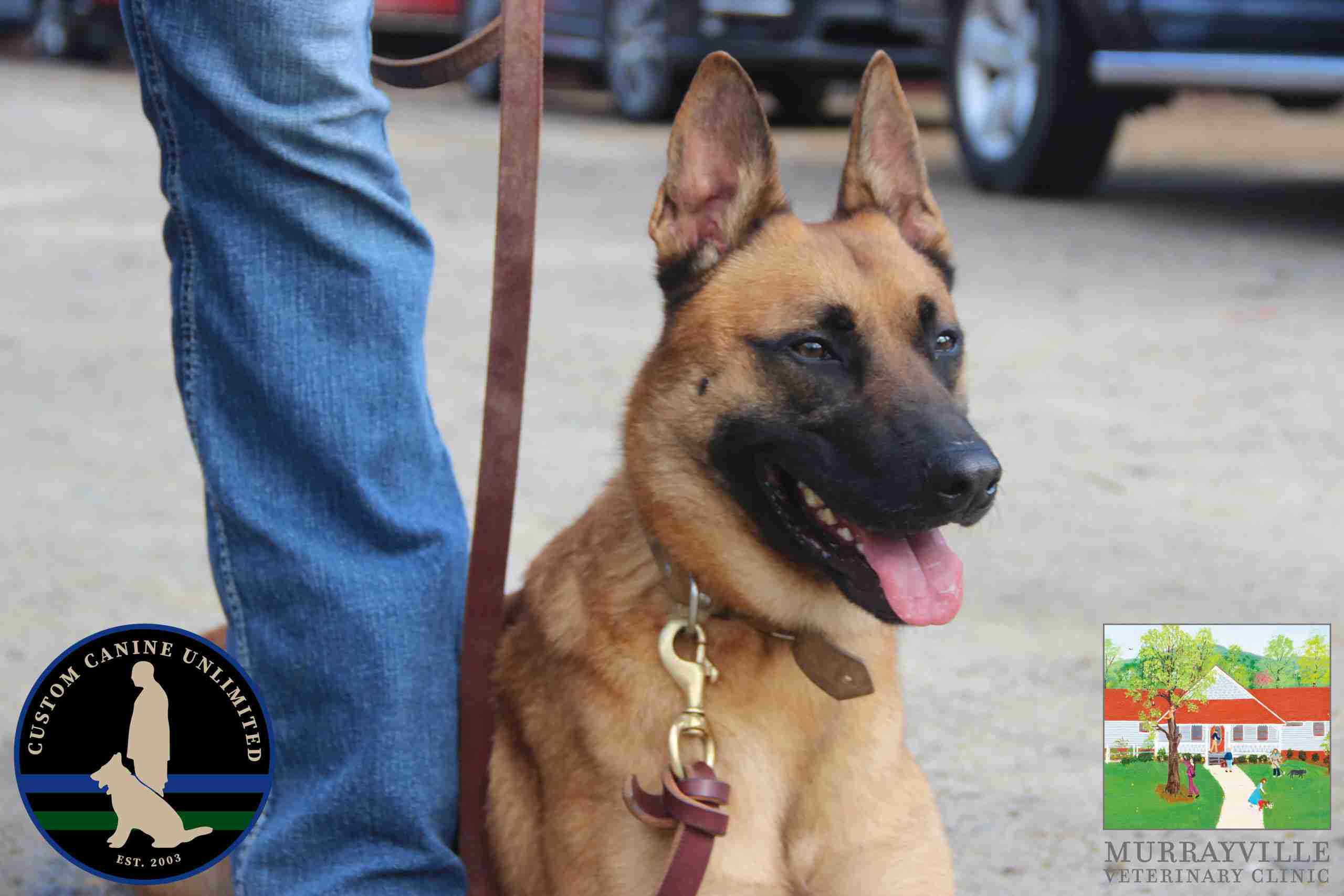 To get a glimpse into the background of “A Hero’s 5k”, see our previous blog at: https://customcanineunlimited.com/a-heros-5k-the-beginning/

Also see https://customcanineunlimited.com/a-heros-5k-the-building/ to check out how the run has progressed over the years and the future for it!

As outlined in Part 1 and Part 2 of our blog, Custom Canine Unlimited is facilitating getting a trained dog to a Veteran in need. Custom Canine Unlimited is honored to be a part of “A Hero’s 5k” and to be able to help give back to the Veteran community. Murrayville Veterinary Hospital is donating their services to make sure the K9 goes to its new owner’s home healthy and happy.

Meet Ander! Ander is a Belgian Malinois born on July 26th, 2018, making him 2 years and 7 months old. Ander was born in Holland, where Custom Canine Unlimited’s Holland division evaluated to make sure Ander would be up to the high standards of Custom Canine Unlimited. Ander is certified in tracking, for article search as well as search and rescue, with experience with various K9 handlers.

Ander is extremely well versed in basic, as well as, advanced obedience. He knows commands such as heel, sit, stay, come, and even sit and stay for 15 minutes, even when the handler is not in sight. Suffice it to say, Ander is a master of the basics! Ander even has the potential to be used as a tool for work for the Veteran. He could be used as a missing persons search dog or for tracking with a variety of departments. Ander’s opportunities are truly vast!

Custom Canine Unlimited’s main goal, as well as that of K9 Trainer Scott Oakes, with Ander is for Ander to be, “A buddy, a well-behaved pet…an animal that can keep someone occupied and avoid depression. A tool to help someone get out of the house, keep the handler healthy, and to have fun with their dog to alleviate the burdens of life,” says Scott Oakes. He goes on to cite “…a best friend with a job.” Scott Oakes made sure than Ander’s personality was on point with that of an ESA animal and was carefully evaluated to make sure that the K9 would work its way seamlessly into the Veteran handler’s life.  Oakes tell us that Ander is “…a good mixture of independent, but yet sensitive. He’s not too overly needy, but he’s not just a ‘Leave me alone and let me do what I want’ dog. [Ander] isn’t bad about begging for attention, but his timing is impeccable for ‘Hey! You look bored…Love me!’ “

Scott Oakes has been invested in Ander’s training from the start. Oakes spent a lot of time coordinating with “A Hero’s 5k” and the Veteran himself to be able to pick a K9 that would enhance the Veteran’s life. Oakes says, “[I] picked [Ander] based off of our conversations with Doug Smith (Event Director at “A Hero’s 5k”) and the Veteran to try to match the personalities and what exactly it was that he wanted out of a K9.” Oakes has even been taking Ander to his own home, around his own small children, to be able to teach Ander what he needs to know about home and family life. Much like the lucky Veteran, Oakes’ children are 3 and 2, and he trusts Ander completely with his children. Oakes says that he’s, “…teaching him normal house manners. [ I have taught him] to have ‘normal’ house manners and how to appropriately interact and play with the children versus a large adult…. [I’ve] made sure he’s not afraid of children and have given him typical family house manners.”

But the home training doesn’t stop there! Oakes even says, “I have taught him to not chew up his toys, but to just have fun with it without destroying or demolishing them.” Oakes tells us that he has also taught him boundaries in the home, such as not going into the kitchen, not to beg for food, and not to get on furniture unless invited. Ander travels with Scott Oakes every day from home to Custom Canine Unlimited’s main campus in Gainesville, Georgia. Ander will be more than used to accompanying a handler anywhere and everywhere once he is given to the Veteran. Ander is also being trained to be desensitized to loud noises, such as sirens and crowds, and to large groups of people, which will be great for Ander’s career aspirations.

Scott Oakes can relate more to the chosen Veteran more than just K9 training. Oakes is also a Marine, having served for 8 years and in 2 deployments to Iraq and Afghanistan. Oakes has been training dogs since 2016 and went through Custom Canine Unlimited’s Full Service Trainer Course. When asked why Oakes got into the industry, he says “If you want to see unconditional love, look at a dog. Dogs have introduced me to a lot of different people; they’re great for overall health and wellbeing of a person. Having that unconditional affection and attention makes you feel wanted…makes you feel worth something again. I’ve watched people with high anxiety and depression go from never leaving the house, to holding jobs and being productive members of society.”

I finally asked Oakes how he felt about being able to help with “A Hero’s 5k” and being an instrumental part of getting a K9 to a Veteran in need and he said he was, “Honored to do this for another Veteran. Even when I had my own company, it was all about giving back to those who have given to a cause greater than themselves. To be able to be a part of this is always an honor and a privilege, [truly] a dream come true.” His final words were, “Having that connection and relationship with [Custom Canine Unlimited] clients and watching people go from either not understanding or frustrated, to happy outgoing individuals just because of dogs and working with dogs, is what it’s really about for me. It’s the connection that seems to be there with people and the dogs.”

We appreciate all you do, Scott. Thank you, and thank you to the Veteran for your service.